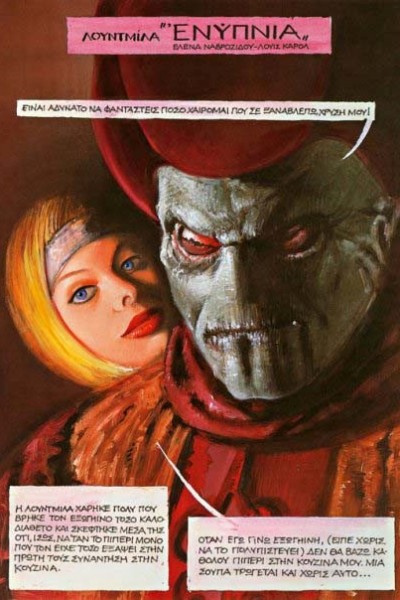 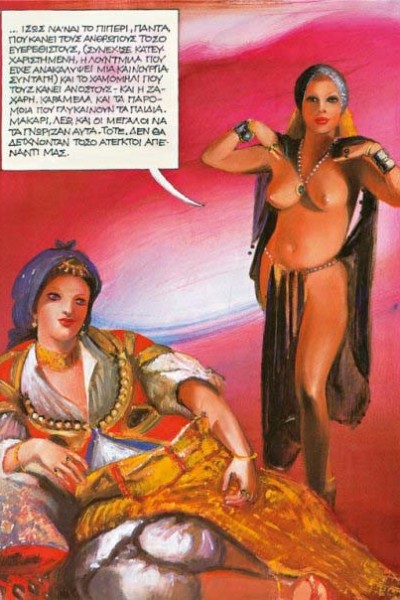 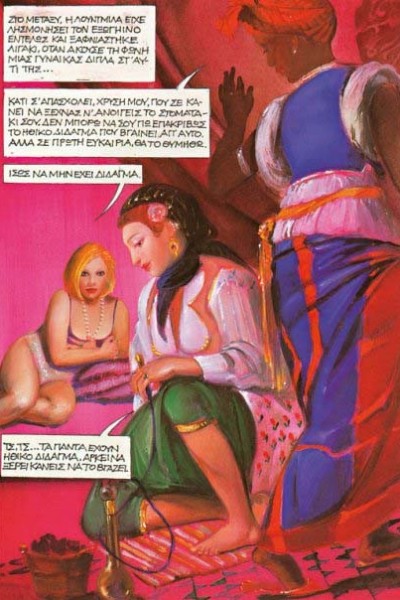 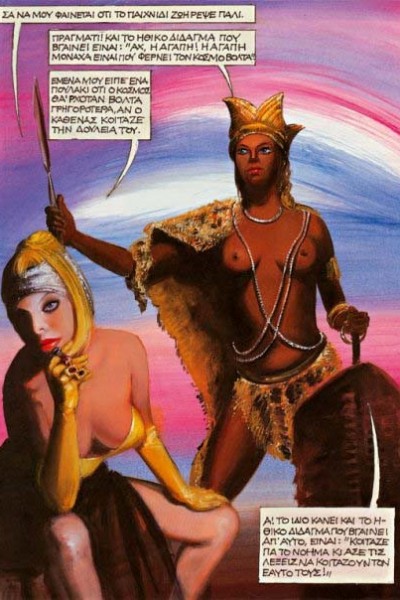 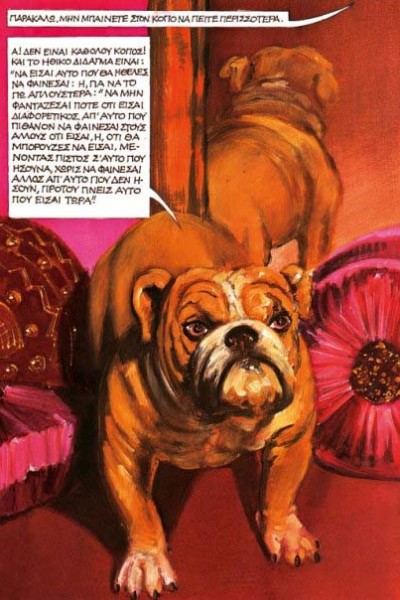 The Ludmilla Series: An Alter Ego

No matter if she started exhibiting her work in Greece and abroad in the mid-eighties, the Greek public got broadly acquainted to Helena Navrozidou during the early nineties through an “alchemic marriage”  that is her hedonic artistic co-existence with another graphic artist, Kostas Vitalis , that lasted for about two decades. Their comics were published not only in successful comics magazines like Vavel and Para Pente, but also in the Greek edition of the Penthouse (see bibliography). Their common work gave us some of the most excellent Ludmilla stories (1994-2005) and two great graphic novels, Spring Night and The Temptation of St Anthony (1997) (see bibliography).
Both the stories by Navrozidou or by Navrozidou-Vitalis are placed into spaces of the fantastic in diachronically erotic couplings from Ancient Egypt to the Far East. Their painterly style, deeply influenced by the Flemish Baroque School and especially Rubens’ lively colors, realistic enough to be postmodern, has actually created a school in Greece, that of painterly style comics and graphic novels, adored by few and hated by the ‘00s generation.
One of the most striking things with Navrozidou-Vitalis’ work is that they derive their script from ancient, medieval or 19th century literature: Gustave Flaubert, who seems to be a permanent source, Georges Bataille, Dante Alighieri, e.a. It’s interesting here to remark that Flaubert is one of the French artist Phillip Druillet’s favorite sources. Druillet, moreover, is one of Navrozidou’s favorite contemporary artists (Sampanikou, 2005). What one can say of Navrozidou’s work in Ludmilla is that here fantasy coexists with libido, thus creating a special and unusual in context fiction of erotic fantasy with elements from Ancient Egypt, the painting of the Roman Pompeii and the European Flemish tradition.
However, no matter how erotic her stories can be (enough to act as a humoristic substitute according to the artist in one of her numerous newspaper interviews) Navrozidou neither denies nor underlines her sex. What she underlines is the notion of identity as we will see in her installation work, where sense is identity and identity is representation itself.
In these terms, Helena Navrozidou’s work stands between two worlds: a. the hedonist world of the aftermath of the sexual revolution of the ‘70s and the ‘80s, that transcribes the Orientalist narratives into a different, however Western, identity, and, b. the European art history traditions, especially from the point where the Late Renaissance meets the Late Post-Byzantine Art, that is the 17th and the 18th centuries Italian and Flemish traditions. Because, while the narrative [the subtext] of her stories combines Byzantine Church Fathers, Roides and Flaubert, stylistic observations (on the artist’s colors for example), lead us to her attachment to Renaissance and Post-Renaissance Italy (from Byzantium and Gothic/Sienese Art to 16th and 17th century Venice: Giorgione, Titian, Tintoretto, Veronese) as well as to Rubens, Realism and French Comics artists of the ‘80s, especially Phillip Druillet.
As we have already mentioned Druillet has always been a major influence for Navrozidou from her ‘80s period, the period of her massive comics production, the Ludmilla stories, for more than one decade, where she illustrates fictitious stories with a self-reflecting Ludmilla as the main character and an equally realistic Kostas Vitalis. If we finally add a contemporary Egyptian setting, getting however mythological/fictional dimensions (an influence of the frequent visits of the artist to Egypt?), we can have a complete portrait of Navrozidou’s art as a comics artist.